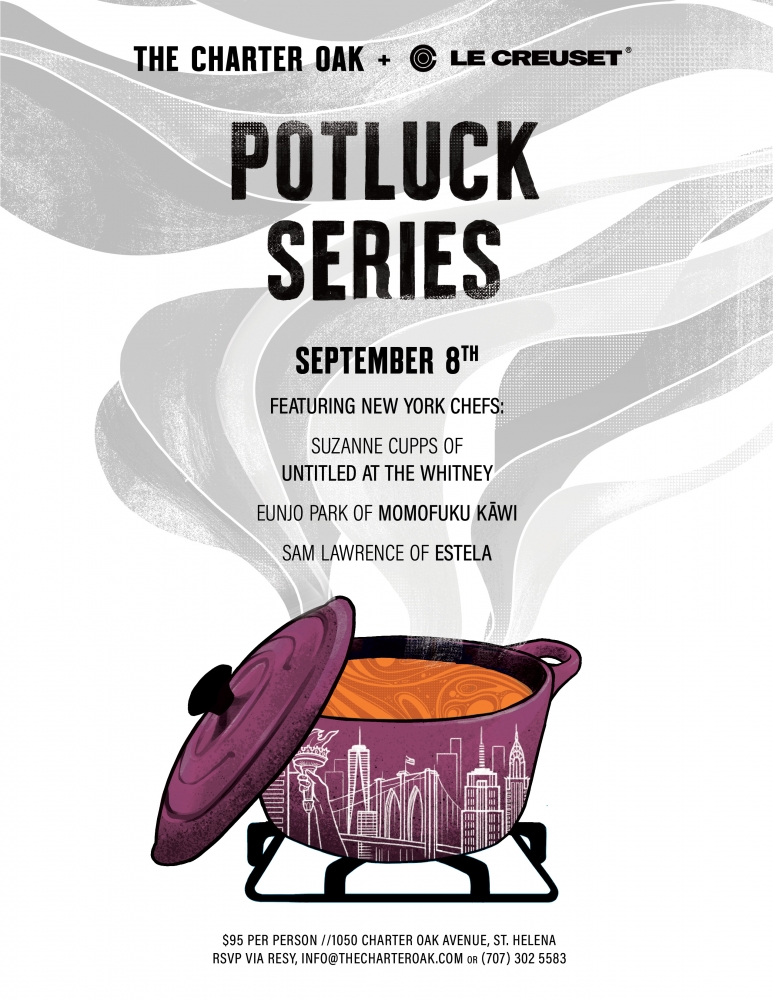 Thank you for joining us at The Charter Oak as we welcomed guest chefs from New York City for a celebratory potluck dinner on September 8th. This dinner series in partnership with Le Creuset benefits St. Helena Preschool For All, a local non-profit providing scholarships to 3 and 4 year-olds in need.

Suzanne Cupps of Untitled at the Whitney, a seasonal American restaurant at the Whitney Museum of American Art in New York. Untitled was recognized in 2015 by the James Beard Awards for Best Restaurant Design. Chef Cupps has degrees from both Clemson University and the Institue of Culinary Education, and has held the position of Executive Chef of Untitled since 2017.

Eunjo Park of Momofuku Kāwi. Eunjo “Jo” Park was born in Seoul, Korea, and studied at the Culinary Institute of America before working at Daniel in New York and Le Bec Fin in Philadelphia. In 2013, Jo joined the team at Momofuku Ko and a few years later moved to Korea where she staged at Chunjinam Hermitage at Baekyangsa Temple under Monk Jeong Kwan and cooked at Gaon, a three-Michelin-star restaurant in Seoul.

Sam Lawrence of Estela, the restaurant by Chef Ignacio Mattos has earned accolades such as a place on the World's 50 Best Restaurants List and two stars from both New York Magazine and the New York Times. Ignacio was named America's Chef of the Year by Esquire in 2017 and his first cookbook Estela was ranked one of 2018's best by the New York Times Book Review.